It’s a blessed day on Halcyon Pond,  for awareness of gifts and unexpected moments.

As I passed the doors to our deck this morning, I saw a furry flash. I thought it was a raccoon, but it was more graceful than that. When I stepped outside I was met by a timid but eager kitten. So small and skinny I can hold her in one hand. In spite of being obviously abandoned, she is one of the most affectionate cats I’ve met. A nuzzler, she buries her head in the crook of my elbow, the nape of my neck.

She reminds me of a cat I met in the plaza of the Topkapi palace in Istanbul. There are cats everywhere in Turkey, who are not strays, but rather belong to the community. They are taken care of, but not owned by anyone, which suits a cat perfectly. Turkish cats have a distinctive look, dark with russet patches—a rich, warm coat—and sparkling golden eyes. This beautiful little cat came up to me in the plaza, open and friendly. I carried her with me for hours, sometimes in my bag, until finally we had to part. This morning it is as if that cat has finally found me again, with the same dark and russet coat, and the same open demeanor, running toward me as if toward an old friend.

I look in her eyes and I sense she is an old soul. I wonder, who are her ancestors? Did the women of the Topkapi palace play with her great great great grandmother? Does she know their secrets? Can she tell of palace intrigue, of eunuchs and murderous plots?

I pull myself away from exotic daydreams. I had many plans for today—many objectives. But she has followed me everywhere since we met, making it difficult to accomplish anything. I think, “I must move on, stay on course!”. But how often does a moment like this happen? How often does a gift just appear, reminding us of the small beauties of life? (Unfortunately, probably more often than we know because we resist being derailed.)

So, I have decided to give myself over to this moment. To feel this small cat’s warmth, feel her trust, listen to her purr and remember the small gifts of life.

A cat’s purr. Serenity given voice.

Oh, and she’s just told me her name. It’s Muse. Which is great, not just because of the pun, but also because there’s always the chance that, when I call her, the other one–The Muse–might just show up. 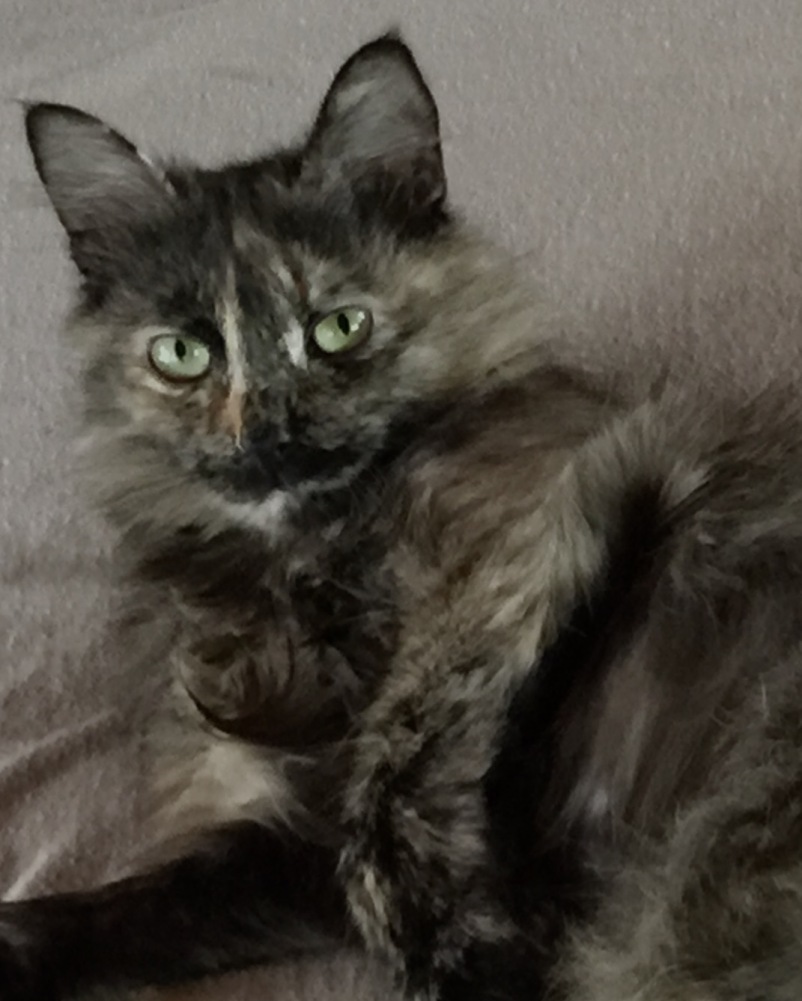 [Note: Muse actually arrived February 12, before I started this blog. I’m posting this now because it will feed into the story line soon. Stay tuned.]

Don’t you love it when
Cats purr
SO hard
It takes over
Their whole body
One purr stumbles
Over the next?
Hyper-purr
Hypurr
High-Purr