Sestri Levante—the eastern-most extent of the Most Serene Republic of Genova. Its watchtowers face east toward Pisa, the enemy. This is Liguria, the home of pesto and perhaps of romance. LIguria attracted poets and writers, including Lord Byron, Percy Shelley, and Mary Shelley (author of Frankenstein), giving name to the Bay of Poets in nearby La Spezia.

Our hotel was steeped in romantic origins. Giacomo wandered the world working on cruise ships and in top hotels. He dreamed of one day building his own hotel, using everything he had learned in his travels. He met a poor but beautiful girl, married her and started their family. He bought a piece of land on a hillside overlooking the ocean and started to build their family home. But when he saw the view from the hilltop, he realized that this should be shared with others. He decide this would instead be the site where he would finally realize his dream. Three years later he opened the Hotel Vis a Vis. It is still owned and operated today by his grandson, Nicolo. 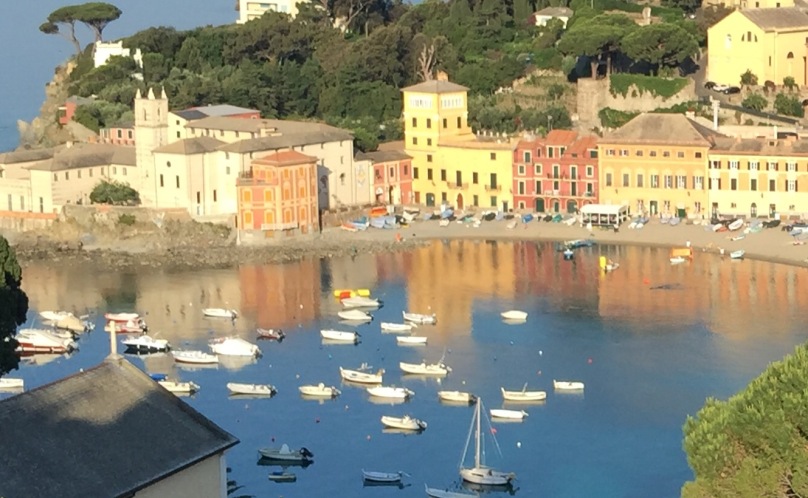 Vis a vis: face to face. The hotel is so named because it looks out over two coves: the Bay of Silence and the Bay of Fables. The Bay of Fables was named by Hans Christian Anderson, who lived in Sestri Levanti in 1830.

The Zeus Lounge and Olympus Restaurant sit on the top floor of the hotel, If you linger there, on the open terrace, perhaps watching the sunset, with the scent of jasmine carried on the gentle ocean breeze, you might believe, as Giacomo obviously did, that you are indeed dwelling close to the gods.