Imagine the high desert plain, the foothills of the Atlas Mountains. To your east is the Sahara, west the Atlantic, north the Mediterranean and south, deep Africa. Berbers roamed these lands.  Rome invaded, as did the Moors, and the French. Morocco stands at the center of these crossroads; the rich, complex, and exotic amalgam of Berber, Moorish, African, Jewish, and European culture; swept by the breezes of the Mediterranean, the winds of the Atlantic, and the sands of the Sahara, and reaching to the clouds atop the Atlas Mountains.

You are in  Al Hamra, or Marrakech. The Red City, named for the terra cotta walls of the medina. Everything around you is earthtone. It is dry and dusty. You sense you are closer to the Sahara than to the sea. You pass through the gates of Jardin Majorelle and are awash in blues and yellows and greens. It is as though you dove from the high desert into the waters of the Mediterranean. You are refreshed. 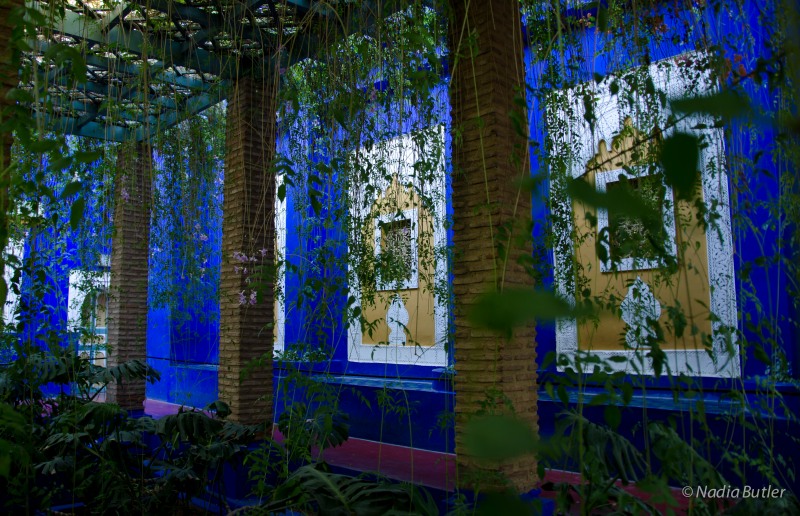 It is a paradoxical garden. A peaceful place, removed from the noise of the city. But the bright colors stimulate, carrying your eyes from one focal point to the next. The garden was designed by Jacques Majorelle, a painter. It was his ultimate passion, of which he said, “This garden is a momentous task, to which I give myself entirely. It will take my last years from me and I will fall, exhausted, under its branches, after having given it all my love.”  It is an artist’s garden, where light and shadow play among the exotic plants and every angle of view provides a vista.

It is also a collector’s garden. Majorelle brought plants from around the world together here and integrated them into the garden, including cactus, which stand in stark contrast to the lush greens and water features that provide the garden’s backbone.

Marrakech grew as a tourist destination, and Jardin Majorelle was threatened. Developers thought a hotel would be more suitable than this exquisite garden. It had fallen into disrepair, but still seduced Yves St. Laurent and Pierre Bergé. They loved it on first site in the 60s and then saved it in the 80s. And once again the garden became a labor of love. St. Laurent and Berge restored the garden and ultimately decided to live there.

They added their collection of Berber art, which is housed in a small, delightful museum within the garden. When you pass through its doors and into the room displaying women’s jewelry and headdresses you are transported once again from the cool blues of the sea to the high desert plain, under the stars. The room is dimmed and the ceiling portrays the night sky. You imagine yourself a part of a nomadic tribe and marvel at the complex beauty of the jewelry. Humanity’s artistic impulse displayed, rather than in the architecture and artifacts of fixed civilizations, in the movable art of jewelry and tapestry of the nomadic tribes.

Jardin Majorelle distills the essence of Morocco and presents it to its visitors as a cool, quiet elixir to the heady and exotic world outside its gates.

The World Beyond Halcyon Pond